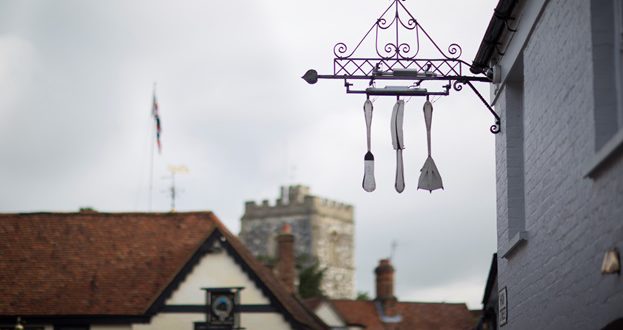 ‘We have everything you want to find when you go to a local pub,’ explains Matt. ‘We serve burgers, fish and chips, jelly and ice cream and are where the locals in Bray come to have a few pints, a sandwich for lunch or a meal at the weekends. Of course, we get our fair share of destination diners too – especially at the weekend – but it’s the locals who come back again and again that we’re really focused on. We have a discount scheme for people living in the area and hold lots of events, village fetes and wine tastings every year. We really want to give back to the community and be involved with it as much as possible.’

Of course, if it serves food and it’s owned by Heston Blumenthal, then there’s going to be some serious work going into the menu. Matt gets full access to all the research, testing and experiments that go through The Fat Duck’s development kitchen, so if the team has perfected a recipe for, say, an onion gravy, they can share it out across the group. This means the same methods are used in The Crown, Dinner, The Hind’s Head, The Perfectionists’ Café and The Fat Duck.

‘If a car company spent time and money developing an amazing windscreen wiper that never broke, then they’d start fitting it to their whole range of cars,’ says Matt. ‘That’s what we’re like with recipes here. We have lots of pub classics on the menu, but it’s the development behind each element that makes them stand out. For example, we serve sausages and mash, but we make the mash in the same way as they do at Dinner – blanching the potatoes at 72°C to set the starch, then cooking them at 95°C, then putting them through a ricer and an extra fine sieve, then whizzing them up in a Kenwood until the starch breaks down, then adding butter and finally some milk. It takes time to make it in that way but it means we have the best mash at the end of it all, and it’s that approach to cooking which I think sets us apart from all other pubs in the UK.’

The mashed potato is just one of dozens of examples Matt rolls off where the results of intense testing, tasting and developing have made their way onto The Crown’s menu. The batter for the fish and chips is squirted through a siphon gun for extra crunch, the beef for Sunday roasts is seared, blowtorched then cooked overnight and everything is tasted time and time again, often with The Fat Duck’s head chef Jonny Lake and Dinner’s executive chef Ashley Palmer-Watts offering their opinions. For a charming yet unassuming sixteenth century pub (with a tiny kitchen and surprisingly large garden), among the wooden beams and roaring open fire, there’s some seriously decent food being served. So why isn’t Matt aiming for a Michelin star? ‘If it happens it happens, but we’re not really looking for one. I think everyone is quite happy at the level we’re at – The Fat Duck is a world-class experience and The Hind’s Head has a Michelin star, but we want to be a place where everyone can come, whether they want one course, a few pints or a sandwich at lunchtime. It’s almost like having three tiers of places to eat in Bray.’

However, just because Matt is happy with how the pub is doing, that doesn’t mean he isn’t constantly changing and improving the menu. It’s a constant evolution process – the batter for the fish and chips has changed six times since he started working there five years ago – and while the service might be more relaxed than that at The Hind’s Head or The Fat Duck down the road, the cooking always has to be top notch. ‘You never know when Heston’s going to come in for dinner, so you have to cook every dish like you’re cooking it for him. You know that the one time you don’t make sure everything is perfect, it’ll end up landing on his table.’ Perhaps it’s this attitude, combined with the immense research behind every element on the plate, that makes The Crown not just a pub – but something more.